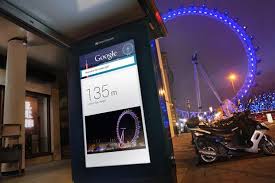 Google, which always likes to think outside the box, has taken search marketing outdoors.

As part of a promotional campaign, it has taken its search technology to the streets on London, providing access to it in the capital’s tube stations and bus shelters.

The pilot project has involved Google installing huge screens at over 150 locations in key transport locations in London. The displays provide people with information about their location and includes ‘topical’ news, including the weather, transport delays and, for example, if raining, the whereabouts of a local cinema.

The displays run a version of Google Now technology which is a platform currently used by smartphones.

A Google spokesperson described the displays as:  “…screens that will anticipate people’s needs and make their lives easier…”

It’s likely that the campaign, once properly tested and implemented, will be rolled out across wider London at more tube and underground stations.

Transport for London says that the Google campaign is one of the most innovative it has seen in the capital.

The idea is to make search marketing accessible to as many people in London as possible. Which is something that the clickmate has to applaud.