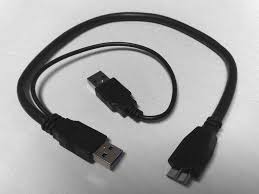 This might not be strictly search marketing news, but the clickmate office was alive with excitement this week over the news that there is now a new USB cable – one that you won’t have to turn around trying to get it the right way up for the port.

Think how many hours are lost trying to get the USB cable the right way up.

By the way, the whole idea behind the USB cable and port system is to create a standardised connection for data transfers between electronic devices and the great thing about this new connector, is that it will be reversible.

The USB design and workings are co-ordinated by something called the USB Implementers Forum which says that the final designs are likely to be finalised in the summer, for use in company’s products by Christmas.

Roll-out will depend on manufacturer pick-up.

The new port apparently resembles the Apple’s Lightening port and, known as the Type C, will be roughly the same size as the current MicroUSB connector.

But although the ports are smaller, the new cable will pack a greater punch than the existing model.

It will allow for scalable power charging (up to 100 watts); will double capacity of data speed transfers to up to ten gigabits per second; and, importantly, allow for many future upgrades.

The end of turning the USB cable over and over, is now very close at hand.