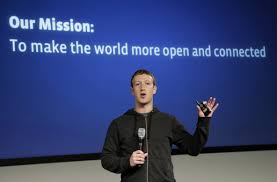 Facebook was right to see mobile as the future says the search marketing team. The social media company has announced, within its third quarter earnings statement, that a whopping 48 per cent of its users now access the platform from their mobile device.

When it first floated on the stock market, Facebook told investors that mobile would be the future and it looks to have got that completely right.

In this the latest quarter to be announced, nearly $900 million of ad revenue was generated from the platform’s mobile app install and engagement advertisements.

In total, Facebook increased revenues in the quarter under review to over $2 billion.

CEO Mark Zuckerberg said: “It’s a pretty incredible sign of how Facebook has evolved in the past year.”

The company has made it clear that it expects mobile revenues to eclipse desktop/laptop users by the end of the year.

When combined with Instagram, Facebook reckons it can now say it has over 150 million monthly mobile active users.

This is pretty impressive reckons the clickmate office and it has seen search marketing going ‘mobile’ over the year. Companies are having to work hard to keep pace with developments.